Between 2003-2020, Alixa and Naima maintained unwavering devotion to mobilizing their creativity to shift culture by conveying complex issues through accessible and soul stirring works of art. We are humbled and immeasurably blessed to have given our life-force energy to that which we care about and believe in through Climbing PoeTree! 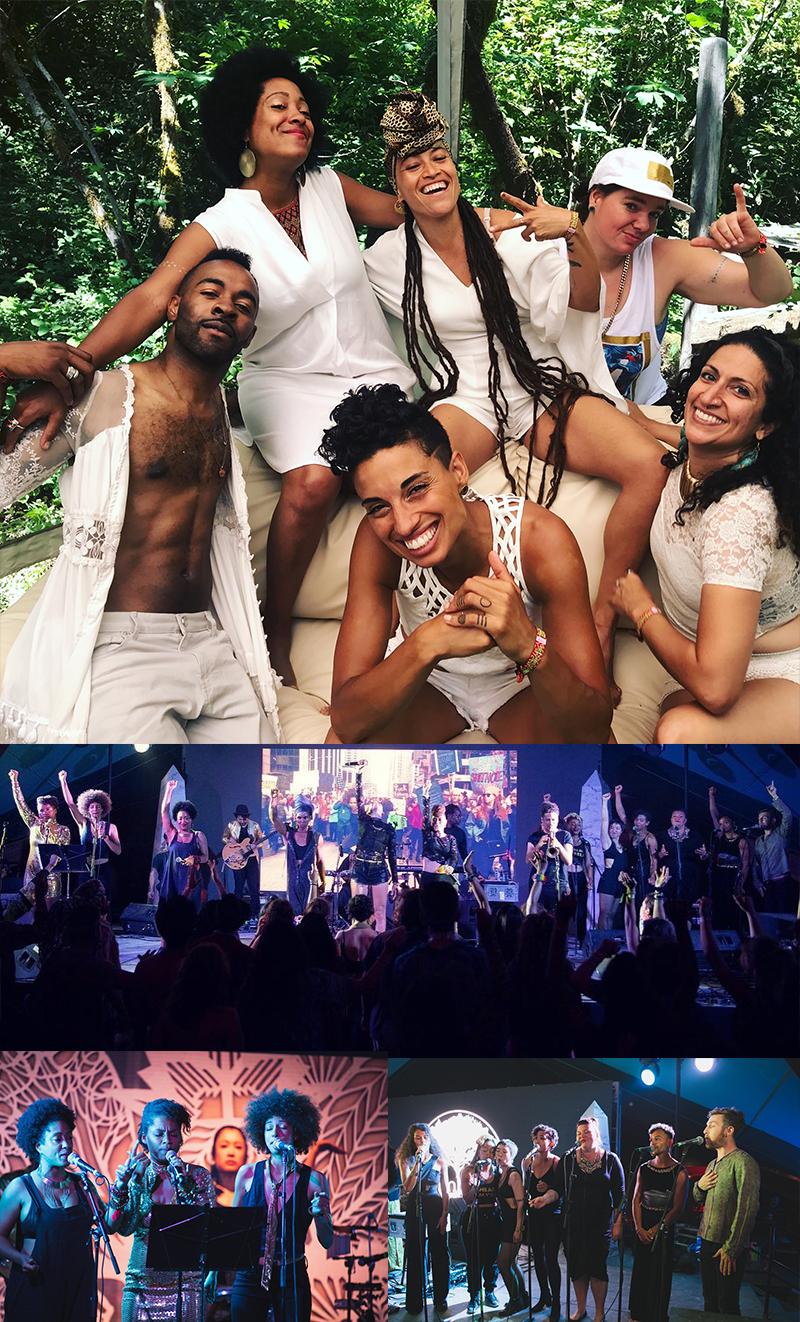 For 18 years, Climbing PoeTree harnessed creativity as the antidote to destruction through spoken word, hip hop infused world music, and multimedia theater. We organized more than 35 national and international tours, taking our work from South Africa to Cuba, the UK to Mexico, and all throughout the U.S.


At concert halls and conferences, classrooms and festivals, prisons and universities, Climbing PoeTree has inspired thousands of people to activate the transformation they wish to cultivate within themselves and their communities.

For 13 years, we invited our audiences and workshop participants to write their Stories, Testimonies, Intentions, Truths, Confessions, Healing, Expressions, and Dreams on squares of fabric that we sewed together into colorful prayer flags called S.T.I.T.C.H.E.D

Over 7,000 submissions and hundreds of feet long, the tapestry has been used to catalyze collective-healing, anti-oppression, and media justice workshops in communities across the country including inside of prisons and detention centers.

We traveled over 11,000 miles in a bus converted to run on recycled vegetable oil with an all women crew delivering “Hurricane Season” to thousands of people in more than 50 communities nationwide and featuring 200 community-based organizations. The performance ritual combined spoken word poetry, shadow art, dance, film and animation to examine the “unnatural disasters” of state violence, environmental injustice, and displacement.

We published a book containing 70 original poems through Whit Press, a publishing house committed to fair labor practices and environmentally responsible printing.  Thousands of copies are in circulation!

We had the honor of sharing our work with grassroots movements in historic moments alongside radical visionaries such as Angela Davis, Cornel West, Vandana Shiva, Michelle Alexander, Patrisse Cullors, Alicia Garza and Danny Glover, to name a few.

Climbing PoeTree performed on the world-renowned TED stage alongside groundbreaking women leading the way in social change, arts, technology & design. Tarana Burke opened, Stacy Abrams closed, and in between was a constant swell of inspiration and undeniable power. Watch our performance here.

We banded together with Invincible and Las Krudas to form an international, bilingual, pansexual, polyracial, multi-media, cross-genre, intergalactic collaboration called “OuterSpaces: Power in the Margins,” for a 12 city tour and EP that nurtured parallel universes.

Climbing PoeTree developed an arts-based curriculum to inspire the next generation of social change agents with 68 lesson plans! The course has been piloted in 3 high schools and 2 universities in 5 states.

Through her work at Soul Fire Farm, Naima has been equipping a rising generation of Black, Brown and Indigenous farmers with the skills needed to chart dignified futures in relationship to land.

Naima is an originating member of Harriet’s Apothecary, a Black healers collective that creates accessible, affordable, liberatory community healing spaces for Black, Indigenous and People of color and the allies that love us.

Naima organized solidarity work in her ancestral homeland of Haiti through a project she founded called AYITI RESURRECT. The effort brought together more than 70 African heritage healers, artists and farmers from the diaspora to collaborate with a rural community post-earthquake, planting 4000 trees, hosting 7 clinics and coordinating more than 60 skill shares and workshops.