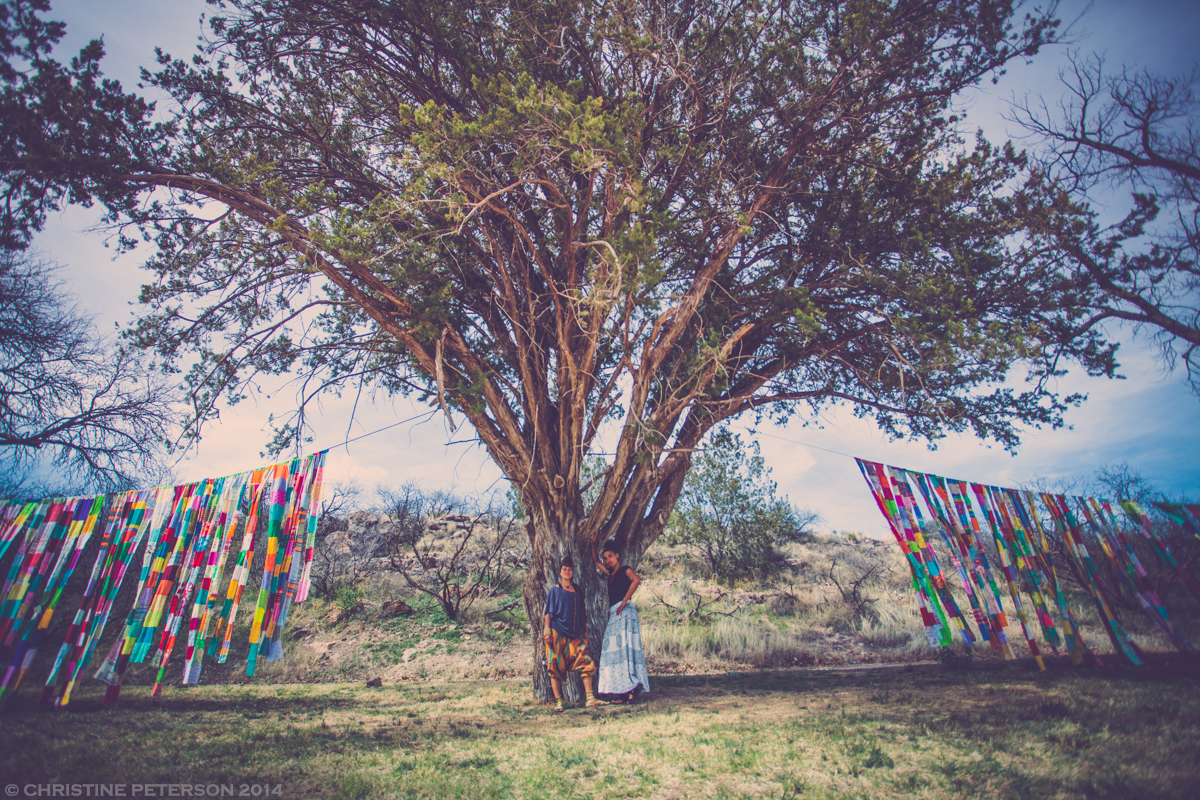 S.T.I.T.C.H.E.D is a story-gathering project that Climbing PoeTree started during their 2005 national tour. This incredible multi-colored tapestry holds more than 10,000 Stories, Testimonies, Intentions, Truths, Confessions, Healing, Expressions, & Dreams written by audience members and workshop participants Alixa and Naima have met across the nation.

We have long understood the power and importance of telling our stories. We are fueled to do what we do as spoken-word artists by the conviction that movement building is the work of story telling: of channeling hope into vision, of shattering assumptions that bind the status quo; of making a better future visible, immediate, and irresistible.

In the wake of Hurricane Katrina, the collective need for us as a people to testify to our lived experiences and to confront the misrepresentations in mainstream media became even more apparent. We challenged ourselves to think of a way we could not only communicate truths from the communities we represent, but also facilitate in the cross-pollination of the stories of people across this country that we’d meet on our migration. The idea to gather Stories Testimonies Intentions Truths Confessions Healing Expressions and Dreams on little square pieces of cloth and sew them together into a giant quilt grew from this need for new voices to make way for new possibilities.

Since 2005, we’ve given our audience participants the opportunity to write a part of their story on a six-inches piece of fabric. At every show we distribute cloth of many colors and sharpie markers, and people find some corner of the room to channel their deepest, darkest secrets and highest, brightest dreams. These are headlines from people who don’t own a newspaper, manifestos from people without armies, testimonies from people without tribunals, expressions from people with histories and visions.

People write about fleeing war in their countries, spending time in prison, being raped by their fathers, learning to kill their own people, about foster care, police brutality, and suicide. And they write about being the first in their family to graduate, about how they are falling in love with themselves for the first time in their lives, about surviving sexual violence and starting a women’s support group in their town, about giving birth and changing laws, starting schools and building movements. They draw pictures, and make promises; they write commitments about the things they would die for, and what they are willing to live for.

We sew the squares together as we go, and the tapestry grows bigger and bigger the farther we journey. Every show we unfurl the strips of fabric and ink, and drape them like prayer flags over stages, and prison bars, over blackboards and between trees. It is powerful to carry the stories with us—to have everyone’s strengths and struggles, tragedies and triumphs pulsating around us while we perform. It is powerful for folks to read them, recognize themselves in them, and leave a piece of their story to be stitched together with thousands of others.

S.T.I.T.C.H.E.D is about history; it’s about herstory. It’s about ourstory, and our collective future. It’s about challenging the coercive messages that are circulating in the mass media with a multiplicity of truths. It’s about the collective wisdom and collaborative power of our communities. It’s about the transformative strength of testimony for healing. It’s about the self-identification that comes from hearing the stories of strangers, the resurgence of humanity, and the realization of community.

S.T.I.T.C.H.E.D. is now composed of over 6,000 stories, and as it multiplies we use it to catalyze collective healing, anti-racism, and creative uprising workshops* with youth, community groups, and students around the country.

The magic of S.T.I.T.C.H.E.D comes from declaring our truths, and bearing witness to others’. When we tell our own stories, we reclaim the power to write our own futures. When we recognize ourselves in each other, we begin to dispel the myths that are created to keep us divided. Our goal is nothing short of transforming a culture of cynicism into a culture of caring. This project is one stitch in the patchwork of our collective liberation.

See more photos from S.T.I.T.C.H.E.D: below, or Click Here for the Tumblr Page